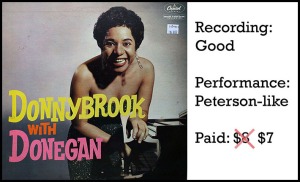 I picked up Donnybrook With Donegan (1959, Capitol T1226, in mono) thinking it was Dorothy Dunn, another jazz musician you’ve probably never heard of. Once the stylus hit the vinyl I knew that this Dorothy was someone else, and WHEW, is she ever. Tell Oscar Peterson to make room on the bench, ’cause Dorothy Donegan, in my not so humble opinion, is just as technically talented as he is.

That’s quite a statement, given that along with Art Tatum, Peterson is often regarded as the most prodigious pure talent in piano playing jazz (I’d put Phineas Newborn, Jr. near the top of the talent category, too. It’s pronounced Fine-us, by the way). Donegan doesn’t tickle the keys, she often flies over them like a rocket on overdrive. It’s as if she skips past the first four gears of a fast car, gets to the fifth, wishes there was a sixth and stays in the fast lane without worrying about the inevitable speeding ticket.

I immediately recalled the criticism often faced by Peterson, that he played too many notes, too fast. Whether that’s valid or not, you could say the same thing about Donegan, too. The more I listen to her, the more I like her, but if you’re in the mood for introspective (Bill Evans), this isn’t it. There are a few examples on the LP where she does slow down, but no matter what tempo she’s at, Dot just wants to solo.

I really like the blues in Donegan’s numbers. The genre just lends itself to her style; constant soloing. For that reason, I think she really excels on one of her own tunes, The D.D. Blues. You’re convinced it’s Oscar Peterson, but Donegan has her own style. It’s a healthy scoop of Jay McShann’s dirty, Kansas City barrelhouse blues, with a few bits of her classical training dropped in, just to mix it up. You have to be some kind of talent to combine those two disparate elements.

I’ve Got You Under My Skin is one of those fast lane numbers I described earlier. Dot only slows down during the first chorus, then it’s back to warp speed. It’s hard to imagine human fingers moving this fast. When the entire band stops mid song, it’s a little jarring, but somewhat welcome, too. The Afro-Cuban rhythms are a nice touch.

The melody line is apparent, in I’ll Remember April. This is an upbeat, rollicking version, with her solo full of notes that made me smile. This is a solo that just doesn’t get tiresome, because she just won’t let it be so. That might be Donegan’s greatest gift.

Tea For Two has some of her classic training applied, but to good effect and once again, her solo takes flight with the greatest of ease. Effortless. When Donegan gets back to a brief line of the melody near the end of the tune, it’s with slightly obtuse notes that add to the depth of the song.

Johnny Smith’s 1952 #1 hit, Moonlight in Vermont, starts off darkly and without any notice of what song it is. There are some atonal notes before her solo goes blues-like as she deconstructs it completely. Block chords take precedent two-thirds of the way in, but not quite like Red Garland’s. There’s more power in the way she strikes the keys.

The recording quality of this mono LP is pretty good. I found the left channel to be quieter than the right, when I transferred it to digital (so that’s the left channel you hear in the medley below). The drums and in particular, the bass, are well recorded; the bass is fat and solid, just the way it should be. Pretty good for an LP from this time. Don’t know who the bandmates are, however.

It took some getting used to, but as I listened further to this LP, the more I enjoyed and appreciated it. There’s just so much talent here. Like most of the women in jazz from this time, she was not respected. Whether Donegan is your cup of jazz tea is up to you, but she’s worth listening to more than once, just for the experience. And for the knowledge that there is always a great talent out there that you’ve never heard. A 1996 Japanese import CD version is apparently available and is quite pricey.

I found this LP at the Streetlight Records record swap back on June 22, 2013. It was priced at $8 but Charlie Lange, of Bluebeat Music from Santa Cruz gave it to me for $7. Thanks, Charlie! Check out my photos from the swap directly below, and then cruise further down for a brief five-song medley from the LP!

Got one minute and 16 seconds? Check out the medley of tunes from the LP!