Growing up in the 1960s and 70s, I didn’t know much about jazz. By the late 60s, there were bands on the Top 40 AM radio airwaves combining jazz, rock and rhythm & blues. Looking back, the best of them might have been Cold Blood.

Signed to Bill Graham’s San Francisco label, the local band wasn’t so much a hit maker as it was a lesser known gem. Around this time, Chicago (with a three piece horn section) released their first record in 1969, an audacious two LP set that was sometimes panned for just that reason…no one had ever released two records for their debut. Sly Stone had horns. Blood, Sweat and Tears had a hit with You’ve Made Me So Very Happy (1968). I can recall the Elvin Bishop Group coming to town (1973 or so), advertised as the “new and improved Elvin Bishop, complete with horns!”

We didn’t think of these AM radio bands as jazz groups, we called them horn bands.

Sisyphus (San Francisco SD205, stereo, 1970) isn’t Cold Blood’s first LP, but it might be their best. It’s darker and moodier than efforts by most of the other horn bands. The horns were trying to tell you something and I was listening. I’d call this band powerful, with horns emphasizing jazz and R&B/funk elements. 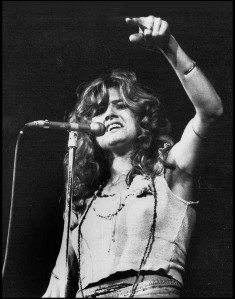 That powerful element stems from two sources, a great horn section and their diminutive lead singer, Lydia Pense. Barely five feet tall, she sounded somewhat like a more refined Janis Joplin. She was a belter, that’s for sure. She could purr like a kitten, too. Her voice could draw you into any song.

“We were all Cold Blood fanatics,” said Los Angeles based session guitar pro Jim Lum. “I think I saw them a dozen times. When I was in It’s A Beautiful Day, we were on the same bill as Lydia Pense and saw her in the green room. I’m still kicking myself for chickening out and not telling her how I thought she was the best singer EVER!”

I believe that these horn bands come out of the jazz tradition. The young men and women in these bands caught the end of jazz as the dominant music in America. Their parents almost certainly listened to some jazz. But Elvis and the Beatles changed all that. So it’s no surprise that horn bands became a reality and were popular with teenagers like myself.

The LP’s opening song is an instrumental, Shop Talk. The title alone tells you something. Larry Field’s thin, but stinging guitar opens it up, and then those horns come in and knock you over. Over and over again. For you songwriters, try to figure out where the usual verse-chorus, verse-chorus, bridge, etc are at. This song comes across more like a symphonic piece to a movie, with a less than obvious structure. The horn arrangements are rarely repeated and it keeps every bar fresh and exciting. Rock-pop instrumentals just don’t sound like this.

If you’re a fan of funk, I believe that drummer Sandy McKee is the funk drummer of the era. Give a close listen to what he’s doing with little fills and his high hat work. McKee won’t bowl you over with bombastic volume or crash cymbals gone mad. His stick work is subtle but worth listening to. Tower of Power’s Dave Garabaldi would also be high on the funk list, but his style is based more on high hat repetition.

Field’s guitar is also right in the funk vein. As a guitarist, I learned that chucka-chucka-chucka style from guys like Field. Funk guitar is quite syncopated, just like jazz is. A few bars into Shop Talk and you’ll hear what I mean.

The audio quality is a little hard to describe. Over my stereo system #1, it has a decent roundness, a bit of air around the instruments. My LP is a little beat, and the groove distortion is a little more apparent when the stylus hits the inner grooves of the last song on side A. I also have the CD (Collectibles COL-CD 6813) of this record. Neither one will knock you over with great sonics. I’d say the record lacks dynamics and depth. It’s flat and somewhat two dimensional. Be sure to check out my vid below, where  you can hear snippets of several songs and at the end, compare one tune on LP vs CD!

I love the opening to Funky On My Back. It’s a piano crescendo reminiscent of ocean waves breaking hard onto a beach. Rod Ellicott’s soulful bass comes in, albeit too softly, but he sets the tone for what’s about to come. Dark, moody, with funk. It’s better heard than described. Every instrument contributes in small ways. Take Larry Field’s short, but tasty guitar licks throughout the verse. Later on Raul Matute’s brief piano solo takes over while most of the band sits out and it further emphasizes the darkness that the opening crescendo set in motion.

Of course, it’s Pense that delivers the musical punch that bowls you over, even if the recording quality of the LP doesn’t do her enough justice. The band would be pretty good without her, but with her…

I was fortunate to spend time with the original recording engineer on the date, Fred Catero recently. He didn’t recall much about the session, but said that the room at Mercury Studios was pretty cramped with the whole band in there. He close miked everyone for that reason and had Pense point the back end of the Shure SM-56 (no, not a 57 or 58) toward the drummer, to reject the drum sounds.

Like other bands on Bill Graham’s label, I wish the audio quality was better. But the performance is top notch. You don’t have to be a fan of 60s’ music to find this a worthy listen, especially if you like your bands a little jazzy, a lot funky, with a dark, moody feeling thrown in.

Got a few minutes? Check out a medley of tunes direct from my LP! There are several snippets of the instrumental Shop Talk, interspersed with other songs.

Comparing the LP vs CD:

At the end of the medley below are compares between my LP and the Collectibles CD. This time, I think the CD is smoother and less congested and wins the compare. There’s a little more stereo separation in the CD, too. The LP is cool, just a little ragged in comparison. The CD also includes the first Cold Blood CD and is a worthy buy if you can’t find the LP. There is also a remastered LP available, but I’ve never heard it and don’t recall who manufactured it. So I can’t say it’s better than the CD and given the audio track record of the bands on the Fillmore and San Francisco labels, I doubt it’s a sonic revelation.

I wonder what would have happened to Cold Blood if they were from LA, or NY? They would have sounded different, but maybe they would have been more successful, sales-wise. Give ’em a try, and as always, thanks for reading and listening.

4 thoughts on “Found! Cold Blood’s Sisyphus: Plus Compare the LP and CD!”