I like taking chances on LPs, that’s part of the fun. The title of this LP and the cover photo didn’t exactly thrill me, but I’d recently heard Eddie Harris play Exodus and loved it. Mighty Like A Rose (Vee Jay LP 3025, mono, 1961) was a very gratifying and easy listen. I’d swear Harris was playing an alto, but he’s on tenor. If I didn’t know who was playing, I’d guess Paul Desmond.

Wanna relax? Sip a glass of cab, take it easy? This is a great LP for that. Harris doesn’t overpower you. He seamlessly slides back and forth between the notes and makes you glad you’re alive to hear this record. No straining to keep up, no bombast. Even when guitarist Joe Diorio (never heard of him) or pianist Willie Pickens (same) come in, it’s the same. Rest easy, Eddie & company are here.

Even when Harris plays Sally T, a blues, you can relax. He speeds up the pace a bit, but not enough to tax you. It’s still a fine ride. Diorio comes in again with some really nice guitar work. A quick search online and you’ll find what I did…that Diorio is quite well known among a small but appreciative group of musicians. I’ll keep my eye out for more of his work. 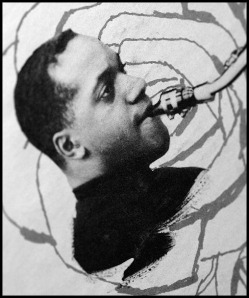 Spartacus is another upbeat tune that has a hook that kind of grabs you. It’s just one note, played over a few times and then gives way to a Harris solo. I found my toes tapping to this one. It also gives drummer Harold Jones a chance to shine. Harris keeps playing those melody notes, keeps your ear glued to the tune.

It’s hard to screw up a great song like Willow Weep For Me or God Bless The Child. No worries here, although I wish Harris had done a little more with Willow. It’s a bit of standard reading. Diorio and Harris work as a duo on God Bless and it’s just plain nice. Simple and beautiful, I think Billie Holiday would approve.

There’s some cool interplay between Diorio and Harris on Fontessa. They play the melody line in sync, a little unusual for a guitar and tenor. Diorio isn’t just a local pick-up sideman on this date, for sure. He finds ways to insert himself with little riffs that make for a better song. His tone throughout is dark and muted, a perfect match for Harris’ tenor.

My LP was beat to heck, with tons of clicks, pops and damage. My software did it’s best but you can hear a lot of extraneous stuff in the medley-video below. I suspect even in good condition, this LP would lack dynamics and air. It just doesn’t have the pedigree of an old Blue Note, or even Prestige record from the same time. But I am recommending it, especially if you’re on the hunt for a late night listener.

I compared Harris to Desmond, but beyond their similar tones, Harris is his own man. Desmond strikes me as melodically more inventive and varied, however. And better recorded.

Got less than two minutes? Listen to a medley from my beat to heck LP!