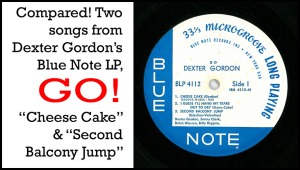 his is the Compared! I’ve been wanting to do for a long time. Dexter Gordon’s GO! (Blue Note, BST 84112, stereo, 1962) is one of the greatest jazz records ever made. Every tune is terrific. I’d take it with me if I were marooned on a desert island. We’re gonna compare five (5!) versions of GO! Four LPs and one CD. You’ll hear excerpts from two tunes, Cheese Cake and Second Balcony Jump. So just who are the combatants today?

First up to bat is a Liberty Blue Note. Not much competition here. This era of BN releases is generally not very good. Even the LP label kinda sucks. You’ll hear the sound quality, or lack thereof immediately. 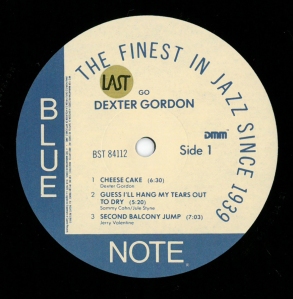 Number two is the first version of the LP I’d ever heard. It’s the oft criticized Pathe Marconi Direct Metal Mastered (DMM) vinyl outta the mid 1980s. I bought it because a magazine I trusted, Stereo Review, had reviewed this re-release. They were right, it was fantastic. But there are many who feel that the sound quality just isn’t very good. But what did I know back then? I put it on my turntable and thought it sounded freakin’ great! Can’t tell you how often I’ve cranked that baby up and soaked in every note Mr. Long Tall played.

Next is the first release of the Blue Note CD, from the same time period (1987)…remastered by Ron McMaster. If you’ve kept up with all the re-releases and remasters produced by Blue Note over the decades (not an easy task), you’ve probably heard that the McMaster CDs are considered to be good, but perhaps not great sounding. The digital transfer equipment just wasn’t as good as it is today. But McMaster did a pretty fair job of it, particularly compared to Rudy Van Gelder’s RVG series that followed…that is often (and often fairly) criticized for often being awful. It’s a long story.

Our fourth contestant is the new Blue Note 75th anniversary (2014) vinyl remaster by Bernie Grundman. If you believe the press, this is the last time Blue Note will remaster their catalog. That’s a bit hard for me to take, but it may be true. After all, those master tapes are five, six, even seven decades old and in some cases, are falling apart. Bought it brand new for $18. With Grundman at the helm, and the latest transfer EQ at the ready, this should be pretty durn good. I noted the shrink wrap was so tight it made for a poor fit around the cardboard sleeve. 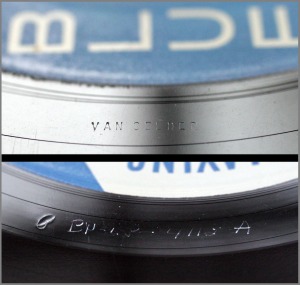 The VAN GELDER stamp and the curly-cue “P” symbol (Plastilyte) next to the run out groove numbers from the New York pressing.

But here we go! Great friend and vinyl guru Mike Okagaki loaned me his New York mono pressing, from the mid 1960s. Here’s what the London Jazz Collector has to say about them:

“NY pressings are superb audio quality, which provide a rich satisfying musical experience, even when second or third pressings. They exhibit a wide dynamic range, a  bright upper register, lots of punch in the midrange, underpinned by a firm natural bass. In ordinary language, they sound “just right” for the acoustic instruments of modern jazz.”

This NY pressing isn’t in mint condition. I suspect who ever owned it originally didn’t have the best of stylus on their tonearm. The opening songs on both sides have some hash, as in groove damage. Fortunately, it abates after a minute or so…but the bright highs can be a little ragged. So perhaps it really isn’t in the best of shape to compete. Ah, well.

All four of the LPs were transferred on the same day, same tonearm/stylus/software, etc. I normalized all five tracks to -1.0db, to keep them at the same volume level. Take a look at my visual compare between the waveforms on a PDF here, it’s very, very eye opening!

I noted that the channels were swapped, depending on what LP or CD I was listening to. For purposes of this test, I ‘corrected’ that problem on the song excerpts.

Have I tipped my hand? The proof is always in the listening, so let’s GO! 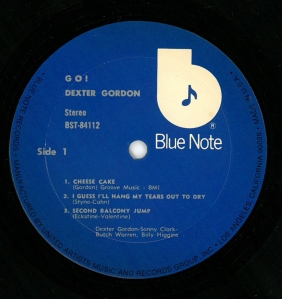 Let’s start with Cheese Cake…which version sounded the best? Christ, I was really expecting a large difference between each of the five versions. But honestly, only the Liberty struck me as being crummy compared to the rest. It was dull, compressed, lifeless. And the Holy Grail LP, the New York mono, initially left me less than impressed. It was brighter than any of the others. Less full sounding. No, my NY version was not close to being in mint condition, so a real caveat there. Maybe a mint copy would fare better. One can only hope.

The DMM Pathe Marconi was a little dull compared to the CD and the 75 anniversary LP had a slight edge over the CD. The 75 had more heft, it revealed more of the recording. Had the ‘air’ that the CD lacked. The CD was also brighter than either the DMM or 75, but not badly. Some of you might prefer than tonal quality.

How about our second tune? I decided to leave off the Liberty and the New York (double ouch!) and just compare the DMM, the CD and the 75 with excerpts from a song, Second Balcony Jump. Again, the CD seems brighter and more forward than the DMM or 75, but the difference isn’t huge. I’d say the 75 is the fullest sounding, a little darker sounding than the CD. Less bright than the CD. But more satisfying. 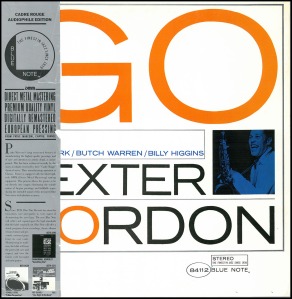 Note the Japanese style Obi that adorns every Pathe Marconi DMM record. They came in different colors, too.

No, I don’t have the world’s best stereo or transfer equipment (see my gear and how I transfer here). Maybe you do. But for my ears, the CD, DMM and 75 were so close it wasn’t really worth crying in my beer over. There were differences, but nothing night and day, at least in my opinion. My test isn’t the most scientific. It’s not a double blind. But it’s the best I can do.

I transfer the vinyl as full rez AIFFs, but the Youtube version you are hearing is a MP4 at 320kbps. So a variable to consider.

My recommend? If you want something reasonably affordable, spend $18 on the new 75th anniversary releases. One caveat: The Dexter 75th anniversary LP wasn’t clean as can be. A fair amount of annoying clicks, particularly towards the end of Second Balcony Jump really messed with my ears. My old DMM was cleaner. You didn’t hear those clicks on my example excerpt, however.

You probably won’t find many of the Pathe Marconi DMMs at your local record store (although they can be found online), and it’s cool if you can get one with the Japanese style Obi. Inner sleeve has a very nicely done history of Blue Note Records and if you’re very fortunate, you’ll get the 24″ circular double sided poster that came with every DMM release I’ve ever purchased new…see it in my vid above. Good luck! 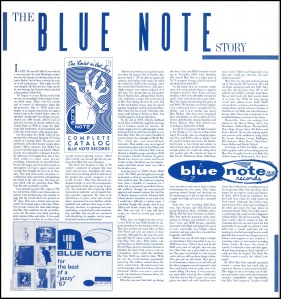 The inner sleeve of the DMM LPs has a cool history of Blue Note on both sides.

If you’re just into the silver disk, go find the original Ron McMaster CDs from the mid 1980s. I have a fair number of these CDs and like them just fine. But no RVG CDs* for me! I tried one and it sounded like the highs had been shaved off, it really lacked life.

The one LP I didn’t compare was the Music Matters version that’ll cost you around $35 a LP. I suspect the difference would not be huge, given what we’ve heard today. I’ve read very good things from most people online about these releases, however.

The test versus listening experience.

Maybe my tests are just that, they don’t translate into the real world, kinda like being back in high school. I think that’s why despite the odd compressed waveform and the tonal nature of the New York, I still enjoyed it. It wasn’t in the greatest condition and I enjoyed it.

So I did one last compare. I played all of side A of the New York mono and then same for the 75th anniversary LP. On the surface, the 75 has more heft, more fullness. But maybe there was something to the NY that came thru in a different way. The more I listen to it, the more it seems to be more focused, almost certainly because it’s mono versus stereo. The stereo version is kind of empty in the middle of the soundfield, except for the piano. The midrange tones dominate the mono LP but seem to fit together better, it seems better balanced. It seems to present a more realistic listen. Perhaps the waveform tells us something after all. The New York’s compression would lead to a more dominant presentation, one that grabs you more quickly, if at the expense of the subtleties of the music. That’s why rock music tends to be compressed on purpose…louder usually wins out over dynamic range, at least at first.

I’m damn glad I got to hear an early Blue Note pressing before I go off to the great turntable in the sky.

Then I put the CD on, side A. I was immediately struck at how the opening bass notes from Cheese Cake came through with some nice air around the plucked strings. But from there, the music sounded flatter, less open, less transparent than the 75. I didn’t notice that so much in my excerpt tests. Hmm. Damn. Hell.

So I didn’t come to the truly definitive answer I was looking for: which version was the best? Maybe that’s a part of the equation that cannot be equated. Listening to enjoy music isn’t a test. But for now, I’d say the 75 is worth the bucks since most of us will never own an early Blue Note LP…but if you want to save some money, the McMaster CD isn’t that far off…and if you want some cool stuff to go along with your LP, a DMM with the inner sleeve and poster is a cool collectible. So GO! get whatever version of the Blue Note recordings you want… and make it a part of your listening life!

*Rudy Van Gelder, or RVG edition CDs. They are pretty common in the used racks, but if you do a search online, you can find plenty o’ detractors, with some exceptions. The older Ron McMaster CDs tend to be cheaper in my experience.