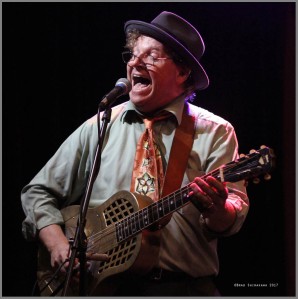 There are cats who can sing and play the Bayou and the blues…and then there is Chicago born & Iowa raised Catfish Keith.

Upon meeting him before a recent show (January 28, 2017) in Lafayette, California, he comes across like a regular guy. Nice, easy going. It’s when he hits the stage that the power of his voice and awe inspiring guitar work power through…like a musical tornado that knocks you on yer ass. And you’re glad to have ignored the storm warning.

Watching his hands, it doesn’t appear that he is playing the most difficult chords. It’s what he does with those chords, those hammered on notes, the bend of the harmonics, or the hard pluck of the strings that stop you in your tracks. Holy mackerel, it isn’t how many notes your playing, or which ones. It’s how.

I just saw Frank Vignola and Vinny Raniolo play in Maui. Spectacular guitarists, with tons of speed and skill. Loved ’em both. Catfish is as spectacular, in his own way. Your ears don’t quite believe what you’re hearing. His voice and notes will grab you by the collar and demand that you listen.

Catfish played both a National Reso-phonic slide guitar, and a made-for-Catfish Santa Cruz 1929 “O” (named the Catfish Special – of Guatemalan Mahogany) parlor sized guitar.* The Santa Cruz, in particular, really pops. The notes explode off the fretboard in ways that not every guitar, even the good ones, can do. I’ve played the usual Gibsons and Martins, Taylors and the like. The Santa Cruz seems to respond with dynamics that are hard to match.

Most guitarists bend a string to reach the next ‘proper’ note, but for Catfish, well…you’ll just have to watch the vid below.

Keith’s voice is as dynamic as his guitar playing. He could have been a blues shouter from back in the 40s or 50s. But there are subtleties to his delivery, too. If you just listen to the audio, you might not hear his voice that well. That’s because he is almost whispering at times.

If you’re wondering (after you watch the vids below) where the ‘drumbeat’ seems to be coming from…it’s from his foot. Catfish stomps on some flat, makeshift wooden plank of sorts and I suspect it has a boundary mic built in. It captures the beat and transfers it to the soundboard & PA system. It’s amazing that one guitarist can sound like a rhythm section. He does it with his foot, but just about every note bombing off his guitar’s body adds to the rhythm. The guy’s a string percussionist. 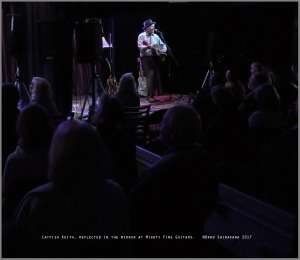 Catfish’s show consists of originals and way cool reinventions of tunes by the blues masters. He plays all over the world. His real last name? Ask him at a show, if you’re in the neighborhood.

My vids are below. Listen over the best system you can, ’cause it’ll make a difference. The audio quality is superb (original files were 96khz/24bit, a mix of the soundboard audio using a Tascam DR40 and also the X-Y mics built into Tascam DR07mkII that were set in front of and just below Catfish on stage)…and I produced the final playback in true stereo, for a listening experience that you won’t find often in modern recordings. Try your headphones to really hear what stereo playback is supposed to sound like, not that mono crap that dominates mixdowns these days.

Crank the volume and be prepared to be mesmerized!

“Have You Seen My Eagle Bird High On The Lonesome Hill” – This is the Bayou, deep, dark and mysterious…at least, I think it is!

“I’m Gonna Live That Life With Music In My Soul”

By the way, if you’re in the eastern part of the San Francisco Bay Area and you’re looking for a fine acoustic guitar shop, try Mighty Fine Guitars in Lafayette. Owner Stevie Coyle is a cool guy with a boatload of boutique guitars on his wall, many of which I’d never heard of. Coyle also hosts a number of great shows on site. Special stuff!

For a short vid where Catfish talks about his roots, try this link from NAMM.